Splitting the Bill: Taxing and Spending to Close Ethnic and Racial Gaps in Latin America 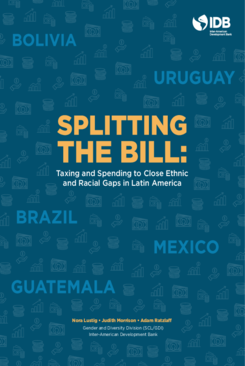 Author
Lustig, Nora;
Morrison, Judith;
Ratzlaff, Adam
Date
Jan 2019
English (1022 downloads)
Spanish (7334 downloads)
DOI
http://dx.doi.org/10.18235/0001429
Ethnic and racial gaps in economic outcomes, labor opportunities and access to basic services, such as education and health remain a challenge throughout Latin America. Taxes and public spending are two effective tools governments have at their disposal to help close these gaps. However, fiscal policy tools are underutilized to reduce inequality in Latin America as compared to developed (OECD member) economies. Done in collaboration with the Commitment to Equity Institute, this is one of the first studies disaggregated by ethnicity and race to analyze patterns of government spending and taxation, and is focused on five countries: Bolivia, Brazil, Guatemala, Mexico and Uruguay.

The study finds that taxes and spending are mostly colorblind in all countries, and therefore do relatively little to reduce pre-existing gaps in poverty across ethnic and racial lines. Moreover, the study observes that direct (income) taxes and direct transfers, such as conditional cash transfer programs, along with education (primary and secondary) and health services, are mostly progressive in ethno-racial terms. Meaning Afro-descendants and indigenous peoples receive more of the benefits -and bare less of the costs- compared to their share of the population. Whereas, indirect (sales) taxes, subsidies, tertiary education spending (apart from Brazil), and pension programs are far less progressive, and can be even regressive in ethno-racial terms. Meaning Afro-descendants and indigenous peoples pay more than their share. The negative distributional effects for education and pension programs are related to lower access to education and formal labor market opportunities for indigenous peoples and Afro-descendants in the countries analyzed.