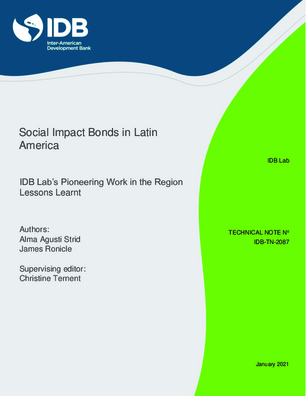 Author
Agusti Strid, Alma;
Ronicle, James
Date
Jan 2021
English (3471 downloads)
View Online
Download
Spanish (9358 downloads)
View Online
Download
DOI
http://dx.doi.org/10.18235/0003004
EDITOR
Ternent, Christine
In recent years, Latin America has seen the introduction of innovative pay-for-success mechanisms to fund social programs, including Social Impact Bonds (SIBs) and Development Impact Bonds (DIBs), outcome-based contracts that incorporate the use of private financing from investors to cover the upfront capital required for a provider to set up and deliver a social service. In this context, IDB Lab established a SIB Facility in 2014 to promote the focus on outcomes in social programs and increase outcomes-based commissioning. The SIB Facility has resulted in IDB Lab providing support to developing SIBs in Colombia (first SIB launched in a middle-income country), Argentina, Chile, Mexico and Brazil. Since then, several employment SIBs have launched in Colombia and Argentina and prefeasibility studies for SIBs on other topics are currently underway in Chile.

This Technical Note aims to capture the lessons learnt from developing SIBs in Latin America, focusing on the five countries where the SIB Facility played a pioneering role. The study takes a retrospective view in examining what has been done and a prospective view in considering how challenges can be overcome and how lessons learnt might be considered within the IDB Lab, both at SIB level and at ecosystem level looking at the SIB ecosystems that have started to emerge. In the study, we find that the SIBs that have launched in the study countries were well designed and that there had also been thorough consideration of the advantages and disadvantages of the model.

Moreover, the study found early signs that a SIB ecosystem is being developed in some of the study countries, with most progress being achieved, for now, in Colombia. Overall, to date, market building activities have been effective in testing the instrument, developing first-time SIBs and growing demand from public and private stakeholders. However, in order for the SIB mechanism to mature, continued support for market building will be critical over the next three to five years to ensure nascent capacities become sustainable and to ensure growing demand for SIBs can be responded to. The study identifies relevant lessons to developing the SIB ecosystem and key ingredients that contribute to the success of ecosystem development: demand from government, a supportive regulatory framework, a favorable economic and political context, availability of data and market capacity. Furthermore, IDB Lab and its partners have played a critical role in supporting the growth of SIBs in Latin America. Their involvement has directly led to three employment SIBs being launched, the first Outcomes Fund in Latin America being established in Colombia, and has sparked further interest across the region.