Silver Economy: A Mapping of Actors and Trends in Latin America and the Caribbean 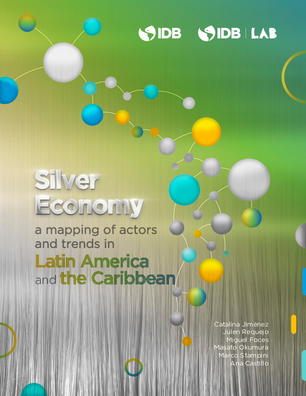 Author
Jiménez, Catalina;
Requejo, Julen;
Foces, Miguel;
Okumura, Masato;
Stampini, Marco;
Castillo, Ana
Date
Apr 2021
English (550 downloads)
Spanish (2201 downloads)
DOI
http://dx.doi.org/10.18235/0003237
Latin America and the Caribbean, unlike other regions, is still quite young demographically: people over age 60 make up around 11% of the total population. However, the region is expected to experience the fastest rate of population aging in the world over the coming decades.
This projected growth of the elderly population raises challenges related to pensions, health, and long-term care. At the same time, it opens up numerous business opportunities in different sectorshousing, tourism, care, and transportation, for examplethat could generate millions of new jobs. These opportunities are termed the “silver economy,” which has the potential to be one of the drivers of post-pandemic economic recovery. Importantly, women play key roles in many areas of this market, as noted in the first report published by the IDB on this subject (Okumura et al., 2020).
This report maps the actors whose products or services are intended for older people and examines silver economy trends in the region by sector: health, long-term care, finance, housing, transportation, job market, education, entertainment, and digitization. The mapping identified 245 actors whose products or services are intended for older people, and it yielded three main findings. The first is that the majority of the actors (40%) operate in the health and care sectors. The prevalence of these sectors could be due to the fact that they are made up of many small players, and it could also suggest a still limited role of older people in active consumption, investment, and the job market in the region. The second finding is that 90% of the silver economy actors identified by the study operate exclusively in their countries of origin, and that Mexico has the most actors (47), followed by the Southern Cone countriesBrazil, Chile, and Argentinawhich have the regions highest rates of population aging. The third finding is that private investment dominates the silver economy ecosystem, as nearly 3 out of every 4 actors offering services to the elderly population are for-profit enterprises.
This study is a first step towards mapping the silver economy in Latin America and the Caribbean, and the hope is to broaden the scope of this mapping exercise through future research and through the creation of a community of actors to promote the regional integration of initiatives in this field.