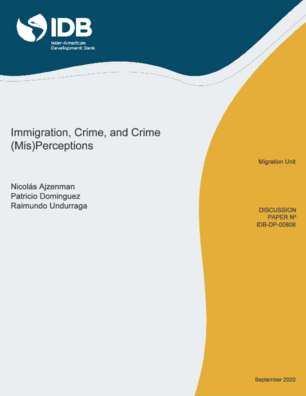 Author
Ajzenman, Nicolás;
Domínguez, Patricio;
Undurraga, Raimundo
Date
Sep 2020
English (1071 downloads)
View Online
Download
DOI
http://dx.doi.org/10.18235/0002714
Does immigration affect crime or beliefs about crime? We answer this question in the context of Chile, where the foreign-born population almost tripled in five years. To identify a causal effect, we use two strategies: a two-way fixed effects model at the municipality level and a 2SLS model, which is based on immigration toward destination countries other than Chile. First, we show that immigration increases concerns about crime and public security. We then document a substantial effect on behavioral responses such as investing in home-security or adopting coordinated anti-crime measures with neighbors. Finally, we show that these concerns about crime seem ungrounded as we fail to find any significant
effect on victimization. When exploring potential channels, we find suggestive evidence of the effect being driven by municipalities with a larger number of local radio stations per capita. We also find that the effect seems to be larger when the composition of immigrants is relatively low-skilled. Finally, using an index of bilateral ethnic distance to measure ethnic-related intergroup threat, we show that the genetic distance between Chileans and the nationality of immigrants does not drive any effects.