The Future of Work in Latin America and the Caribbean: What is the Impact of Automation on Employment and Wages? 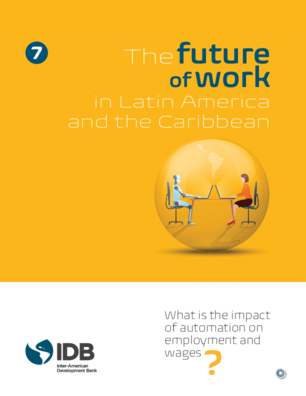 Author
Ripani, Laura;
Soler, Nicolás;
Kugler, Adriana;
Kugler, Maurice;
Rodrigo, Rodimiro
Date
Dec 2020
English (21 downloads)
Spanish (6832 downloads)
DOI
http://dx.doi.org/10.18235/0002960
Until recently, Latin America and the Caribbean had been left out of the debate about the profound changes that the global labor market is experiencing due to the incorporation of robotics and artificial intelligence. One of the main reasons is that, at least until before the COVID-19 pandemic, technology adoption in our countries had been relatively slow. However, the new technologies adopted in developed countries are having an impact on the labor markets of our region. The international transactions of goods and services that characterize globalized economies make it necessary to take into account not only automation in a given country, but also in a global framework.

This sixth issue of the series "The future of work in Latin America and the Caribbean" explores how international trade is transmitting the effects of automation in developed economies to our countries. The publication highlights that the introduction of robots in the United States has negatively affected the level of employment and wages of workers in Colombia and Brazil, while employment in Mexico, which is closely connected to the US economy, has increased. Among all these heterogeneous effects, small firms, young people and women are the most affected by this phenomenon. Download this study to learn more about the opportunities and risks presented by the automation of processes in developed countries.