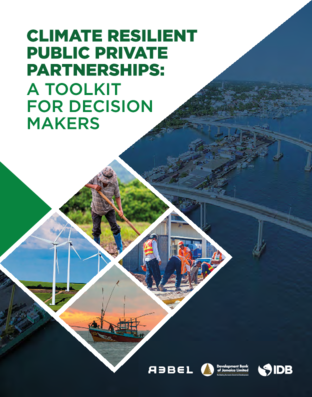 Author
Frisari, Giovanni Leo;
Mills, Anaitée;
Silva Zuniga, Mariana C.;
Ham, Marcel;
Donadi, Elisa;
Shepherd, Christine;
Pohl, Irene
Date
May 2020
English (5668 downloads)
DOI
http://dx.doi.org/10.18235/0002365
The need to consider climate change issues in the provision of infrastructure services through PPPs originates from two key observations in the context of climate vulnerable countries in Latin America and the Caribbean: On one side, these countries face many risks associated with climate change, with their infrastructure stock vulnerable to hazard events like hurricanes and landslides, as well as to chronic slow changes as sea level rise and perturbations in temperature and precipitations patterns. At the same time, Jamaica and many countries as such have been seeking to develop and build its infrastructure with an increased role for the private sector, developing Public Private Partnerships models that are constantly evolving in the region. As very long-dated contractual relationships, the success of PPPs is highly dependent on an accurate, sustainable and efficient distribution of risks and benefits between the public and private counterparts of the transaction risk distribution that can be perturbed significantly by climate change. Following the typical structure of a PPP process, from project identification to contract management, from Project Identification, to the Business Case, the Transaction Structuring and the Management of the Contract during the whole life of the PPP project. In each phase, climate change risks may arise, as well as opportunities for an improved design for resilient and/or more productive infrastructure, and it would be important for such cases that risks and opportunities alike would be considered and followed-through in the different phases of the transaction to ensure, for example, that critical aspects identified in the project preparation phase are then included in the preparation of the tender documents and, as well, inform the performance indicators in the contract management phase.
The toolkit has captured several instruments already used to address climate change issues in the context of infrastructure production albeit not always in a systematic way that could be integrated in the PPP process in a more institutionalized and standardized manner, identifying options for a low-cost and seamless implementation in a Resilient PPP model. The Toolkit, finally, is to be considered a living document; providing initial guidance to professionals implementing PPP projects in the region, while being open to improvements and updating as we collect evidence on other instruments that can be used to manage climate change risks and/or create resiliency opportunities for the infrastructure of the Latin America and the Caribbean.