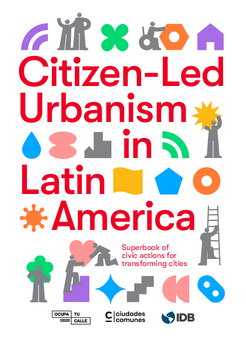 Author
Alarcón, Lía;
Alata, Patricia;
Alegre, Mariana;
Egger, Tamara;
Fassina, Rosario;
Hanono, Analía;
Huffmann, Carolina;
Nogales, Lucía;
Piedrafita, Carolina
Date
Nov 2022
English (2721 downloads)
View Online
Download
Spanish (32623 downloads)
View Online
Download
DOI
http://dx.doi.org/10.18235/0004582
This is a publication about citizen-led urbanism processes in Latin America. It follows the recent life of a movement originating from, and driven by and for citizens, who out of a compelling love for their cities, have brought together actors from all fields to co-create new, more inclusive and equitable public space models. By using tools such as innovation, creativity and co-responsible solidarity, citizen-led urbanism has been able to complement the traditional approaches to urban planning and city governance. This publication also invites us to move from the theory and concepts that provide the rationale for citizen-led urbanism to the actual practical experiences which are helping to shape it and consolidate it as a regional movement. It thus takes us on a journey through successful projects developed in different places and contexts of Latin America and looks at the experience of the first urban innovation labs, as a means to consider the paths that may lead to new horizons of an inclusive future, in view of the challenges, both known and yet to be known, of the first half of the 21st century.

In less than one decade, with their impressive diversity and vigorous urban activity, members of the citizen-led urbanism movement have brought about changes in the streets, neighborhoods and cities where they live: changes in the way of thinking of authorities and fellow citizens; changes in public policies, which have an impact not only on the urban landscape, but also on how we relate to each other through our relationship with what we call “the urban” and with ecosystems, with our individual needs and with the urgency of organizing ourselves collectively to identify solutions for the common good.

This is why this book became a superbook, i.e., an extensive compilation about a fabulous collective adventure, undertaken by thousands of people whose common denominator is creativity and their will to think and do things differently. We hope it may serve as an inspiration to its readers so that they, too, may take a leading role in this story.